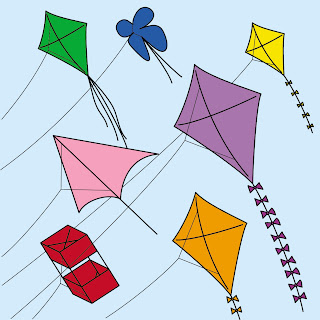 i love kites!!!
they look so cool with all those bright colors floating and flapping around way up in the sky. can you believe kites been around for 3000 years! wow! thats a really long time. way back then they got used for fishing, wars, magic and lots of other things.

now their mostly for fun. you can get all kinds of kites. theres stunt kites, fighting kites, racing kites and lots of other ones in all kinds of sizes, bright colors and every shape you could ever think of. all over the world theres kite days, contests and festivals. zillions of people are flying kites and having lots of fun doing it.

the most fun time for me was when me and my brother andrew made our own kite. we got some old pieces of wood, a used up old white shower curtain that had neat swirlies on it and some old rags we tied up together for a tail. everyone laughed and said that big ol ugly lookin kite wasnt ever gonna fly. but andrews a good builder and he dosnt give up so easy on something he believes he could do and i just knew he could get that kite flying. so, we just kept changing it up a little after every time it crashed and that was a bunch of times. ugh! one day on another try i held it up high over my head and andrew ran as fast as he could pulling that long string over his head and while everyone was laughing at us that kite just jumped right out of my hands and went up up up into the sky. WOWEEEE! it was soooo exciting! it was bigger than any kite i ever saw and its long raggy tail was wagging real proud in the wind like it was saying ha ha told you so to all the ones who had been laughing. me and andrew held tight on that string together. we let out a bunch more string and watched that kite go higher and higher in the sky til it got so high it didnt look like an old shower curtain anymore and looked like a big beautiful white bird gliding way high up on the wind. it was the best and most beautiful kite in the whole wide world. since that time i got lots of store bought kites in lots of pretty colors and shapes and had lots of fun flying them. but i just gotta tell you the best one ever was that ugly white shower curtain kite me and andrew built and flew together.