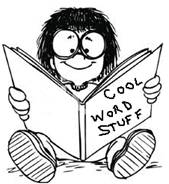 WORDS are sooo cool! i love finding out things about them. just for fun heres some cool word stuff. did you know???

“ough" can be pronounced in 9 different ways! dont believe it?? read this! “A rough-coated, dough-faced, thoughtful ploughman strode through the streets of Scarborough; after falling into a slough, he coughed and hiccoughed.” WOUGH! hough cool is that!

"rhythm" and "syzygy" are the longest words without vowels. syzygy??? huh???

if you spell out every number from 0 to 999 youre gonna find all the vowels except for "a" til you get all the way to one thousAnd!

wanna win at scrabble?? play the word "quartzy!" its the highest scoring word you could make! and...on a triple word score...yikes!

the book gadsby written by ernest vincent wright has 50,110 words in it and NOT ONE word has the letter "e." yikes! who counted??!! and...whos gonna check to see if thats true?? not me!!

of all the words in the english language the word "set" has the most definitions!

a sentence that contains all 26 letters of the alphabet is called a "pangram." heres an example: "Pack my box with five dozen liquor jugs."

the symbol on the "pound" key (#) is called an octothorpe.

"go." is the shortest complete sentence in the english language!

oh...i know youre just dying to know... the longest place name still in use in the world is:
taumatawhakatangihangakoauauotamateaturipu
kakapikimaungahoronukupokaiwenuakitnatahu. its a hill in new zealand. if i lived there for sure id hate someone to ask ...where you from lenny? arrrgh!